‘Sticking to plan was key to survival’ 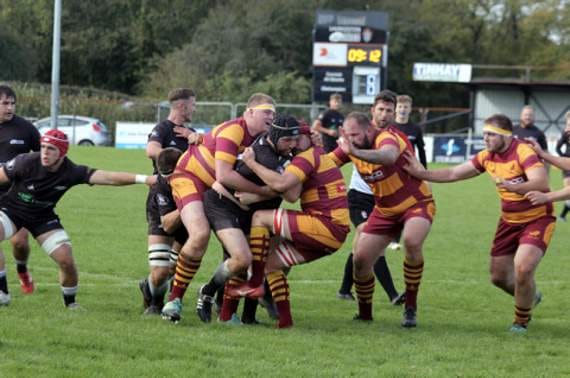 Now that the RFU have confirmed how the leagues are to be finalised this season, it has been confirmed that the Cornish All Blacks will retain their South West Premier status.

As the All Blacks were third bottom in the standings in their first season back at Step Five and five points above the drop zone with a game in-hand, it was all but assured they would stay in the league. The two teams beneath them, Newbury Blues and Bracknell, have been relegated. The methodology was based on the average points achieved for the home games played up to the end of the season and also the away games. The averages for each were then applied to the remaining games left in the season to determine the final league positions.

The Launceston- based club will be looking to build upon their successful 2019-20 season, as they found their feet in the league and only recorded two losses since Christmas.

Despite the season being cut short due to Coronavirus, player/coach Ryan Westren has enjoyed what he called a progressive campaign and looked back on the club’s return to South West Premier.

"From our perspective it was a bit disappointing that we could’ve gone on and finished a bit higher as we were just kicking into gear. It would’ve been nice to have gone full circle after promotion last year to stay up on our own merit.

"It was the only logical way to end the season and I’m glad it was made early enough to keep people safe. Rugby isn’t a high priority for people at the moment but hopefully we can get back to normality and back to playing next season."

Despite the lockdown, Westren is keen to focus on the positives of the current situation and what this extended off-period could do. He explained: "It’s a bit of a grey area when the league will start again and I think recruitment and retention aren’t on people’s minds. However, the positive is that people with ongoing niggles can have a long rest period and fully heal.

"Obviously this is a unique circumstance but we have to take the positives where we can.

"There’s still lots of work being done behind the scenes with staff and me and Ian Goldsmith."

Looking back on the season, Westren was happy with the performance throughout and the progression of the team. According to the player/coach sticking to a plan from the start was instrumental in their survival and being able to climb the table.

He said: "We had to build on last season. We had a plan for the boys and they had to adjust to the league. I think the step-up was quite a lot bigger than some people expected."

Westren knew that the team had to rely on the plan set out in preseason. He added: "We didn’t panic, we didn’t chuck the script out the window and worked long and hard at our plan, despite some people saying we had got it wrong.

"Looking back, the best thing for us was to lose how we did at the start, obviously we would’ve wanted to win. But in the opening games if we were in the tie 35-16 we wouldn’t have had the reality of how difficult the league is.

"I would’ve never said it at the time, but on reflection and coming out the other side, it shows how the lads have taken everything onboard and applied it."

Speaking from personal preference, Westren would prefer to be at either end of the table so that the players all have something to play for. Last year CABs were in the play-off position as well as battling for top spot through the campaign, and this season the fight for survival has been constant after losing away to Exeter University 54-12 in their opening fixture.

"I hate not being in a fight, up or down. It’s when the big- game players come to the fore, not only when you’re fighting for glory but when you’ve got your backs to the wall," he said. "For me, this season showed the kind of players we have and the commitment to the plan we set out."

Westren believes that even from the start of this season the squad were playing better rugby than last year, when they were the other end of the table.

He said: "In the first and second month of this season we were playing a lot better rugby than any point last year.

"We were able to take the foot off the gas last year and still get results. This year we had to be consistent in everything we did and part of the process has been to bring that into every game."

Westren also praised the Launceston faithful as the support throughout the season has been influential in their progression.

He explained: "The support we get from the town is great. I understand that sometimes looking at our results at the start was frustrating and I was amongst them in that. But upon reflection and taking the positives from each game and trusting the process, you could see the difference in rugby.

"The supporters didn’t stop showing their support for the team, which allowed us to continue to build."

Westren wanted to thank everyone, not just in the club but the town.

"We travel to some places and they only have 100 people coming to watch their games; we get hundreds to come and watch us consistently," he said. "We compete with big teams from different areas, but we are able to tap into something else and the whole town gets behind us.

"I want to thank them for the support so that we can begin to get Launceston Rugby Club back where they belong."