Over £1,000 raised at charity rugby match 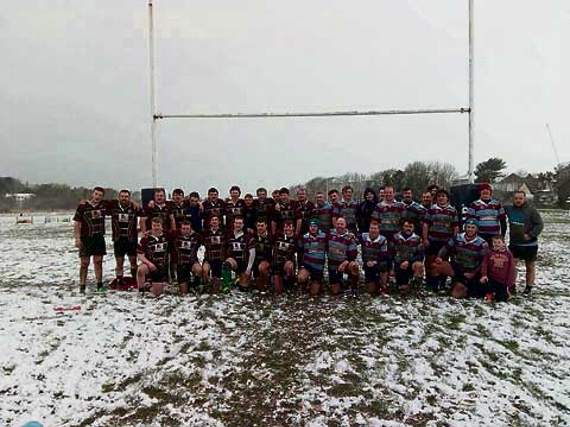 Members of Bradworthy, Stratton and Clawton Young?Farmers took on Bude Rugby Club’s second team (right side of picture) in a charity rugby match at Bencoolen Meadow on Sunday, March 16, with the sides ending up playing out a 7-7 draw. Pictured are the players from both sides after the game.

A combined team of young farmers from Bradworthy, Stratton and Clawton teamed up to take on Bude seconds, with the day raising £1026.22.

However there were genuine fears that the game wouldn’t go ahead as volunteers spent large parts of the morning clearing the snow at Bencoolen Meadow.

Bradworthy YFC’s Chris Allin, who was one of the organisers of the event, said: “We started off not knowing whether it’d be on or not. A number of us went down there at about half-past eight and cleared the snow off the pitch.

“The rest of the teams turned up at about 12 for a quick training session and it started to snow a little bit.

“By the time the game kicked-off at half two, the pitch was white again, so we had to play the whole game in the snow.

“The match itself was enjoyable even though it was freezing cold and it ended up being a 7-7 draw with Bude’s score coming from Finley Fry and ours through a penalty try.”

Once referee Glen Johns brought the game to a close, the players and supporters who braved the atrocious conditions, headed into the clubhouse until around 6pm to enjoy the hog roast which was supplied by the Cornish Bacon Company as well as enjoy a few drinks and a chat.

The money on the day was raised by the hog roast, bucket collections and a raffle.

Chris added: “Overall it was a really good day. There was a really good turnout of about a couple of hundred. Everyone stayed around after the game socialising and drinking and the whole of the hog roast went as well.

“I’d like to thank the Cornish Bacon Company who knocked off a bit for the charities, Bude Rugby Club for hosting the event and donating the baps and sauces, Glen Johns for refereeing and to all the players and supporters for turning up in the bad weather.”