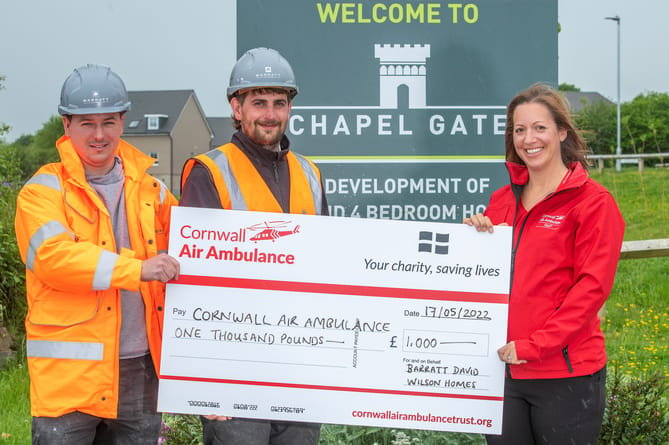 Local housebuilder, Barratt Homes Exeter, has donated £1,000 as part of its Community Fund initiative to the Cornwall Air Ambulance Trust.

Attending more than 1,000 missions every year, the Cornwall Air Ambulance provides critical care to the most seriously sick and injured people in Cornwall and the Isles of Scilly, arriving on the scene in just 12 minutes on average to calls on the mainland, and 30 minutes on the Isles of Scilly. Given Cornwall’s isolated beaches, rural settlements and challenging road networks, the Air Ambulance is a lifeline for residents and visitors alike.

Julia Jeffery, Fundraising Officer for Cornwall Air Ambulance, said: “In May Cornwall Air Ambulance was tasked to 98 emergencies across Cornwall and the Isles of Scilly. The summer season is our busiest time of year, so incident numbers will continue to rise in the coming months. It’s only thanks to the amazing generosity, of supporters like Barratt Homes, that keeps the helicopter flying and saving lives. I’d like to say a big thank you to them for supporting the charity.”

Nicki Reid, Sales Director for Barratt Homes Exeter, said: “We are extremely passionate about supporting the communities in which we work and are delighted to have donated £1,000 to the Cornwall Air Ambulance Trust. The life-saving service they provide is incredibly important and I would like to thank the charity, on behalf of everyone at Barratt Developments, for all that they do.”

Barratt Homes is working across Cornwall, including at Chapel Gate in Launceston and its new Treledan site on the outskirts of Saltash. Well located, Treledan is a stone’s throw from the Tamar Valley Area of Outstanding Natural Beauty and is also a short drive from Plymouth, offering the perfect balance between rural and urban living. The first residents are due to move in over the coming months.